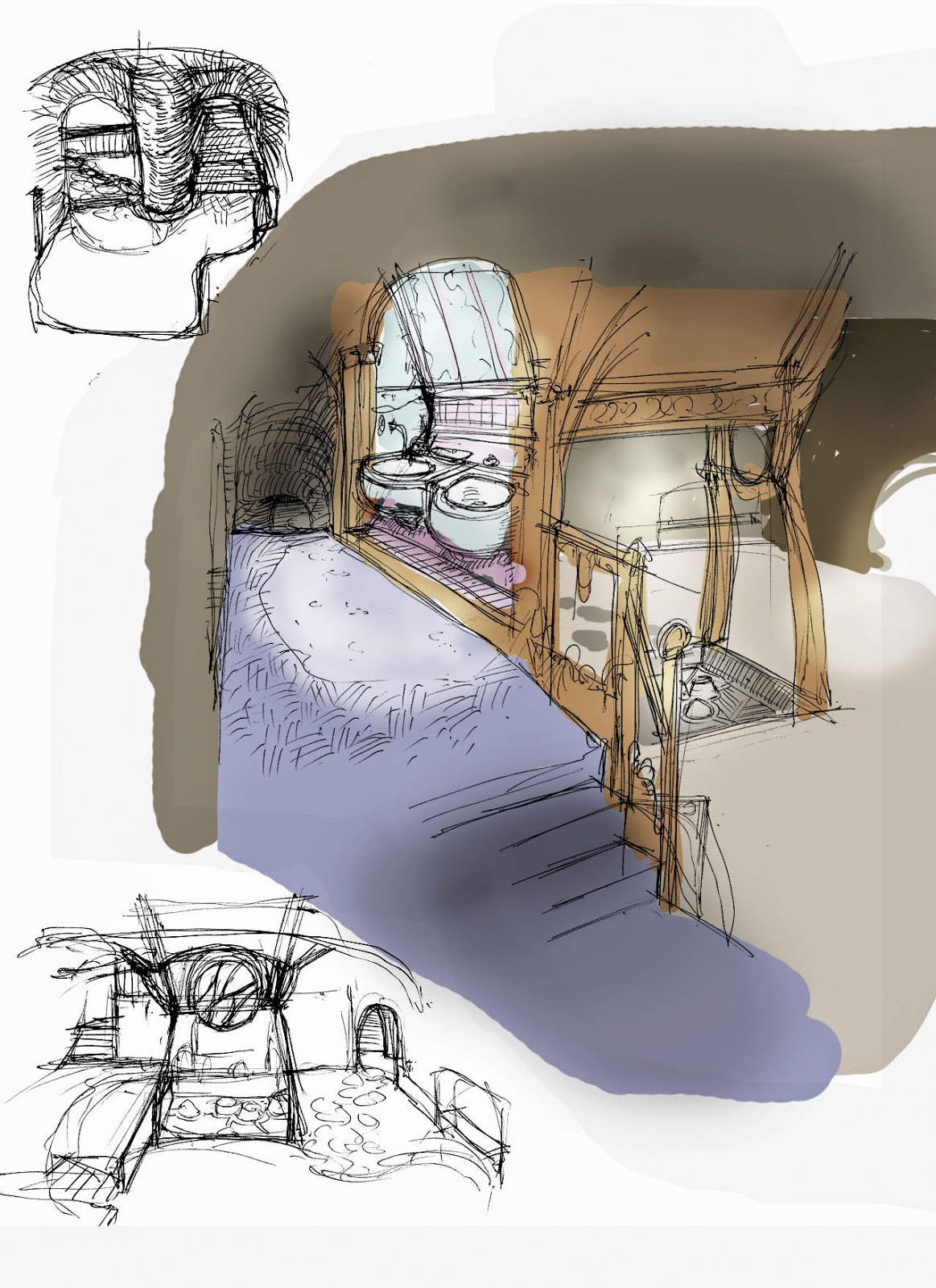 We need help with UDK Save System

We always work hard head on the save system!
Unfortunately, the tests are not very conclusive ...
There is still a bug that slips into the case ... and keeps me going as I want!

- http://wiki.beyondunreal.com/User:Crusha/UltimateSaveSystem
This is a system that allows you to save all variables via Kismet!
It is excellent and very complete! and it does not affect our game files Info

But the big problem: it is quite complicated to save all variables in a game like RoonSehv (all buttons, all puzzles, etc.)

- http://udn.epicgames.com/Three/DevelopmentKitGemsSaveGameStates.html
the "official" system UDK ...
very good system too, it saves almost everything (despite bugs in animations):
- The position of the player
- Animations
- All kismet
- And even physical objects

The problem: it dramatically changes the File Info of the game! It needs its own file info!
So I have come to merge MY RoonSehv info file with the backup system ...
My knowledge of scripts, do not allow it ... so I'm stuck here too!


Help??
If you have ideas, and you want to help us solve this problem, our door is open with great pleasure, you can leave us a message: denis.martin361@gmail.com

I inaugurate a new part of the DevBlog : The tutorials…

Of course, we can find a lot of tutorials on Internet and Youtube.

But, the tutorials that I will write are related to RoonSehv, and therefore with the myst-like ! Thought for futures “myst-like” game designers and developers.

I will not go into details and let you learn and search a bit (is part of the pleasure…).

We will start from a Blender 3D Object that you have created!

Blender
To start on good bases on Blender and if you want import object to UDK, I suggest you to set both programs on the same scale.
To achieve this, it’s very simple : you need to go on the spaceview bar (N key) and correct the following values: 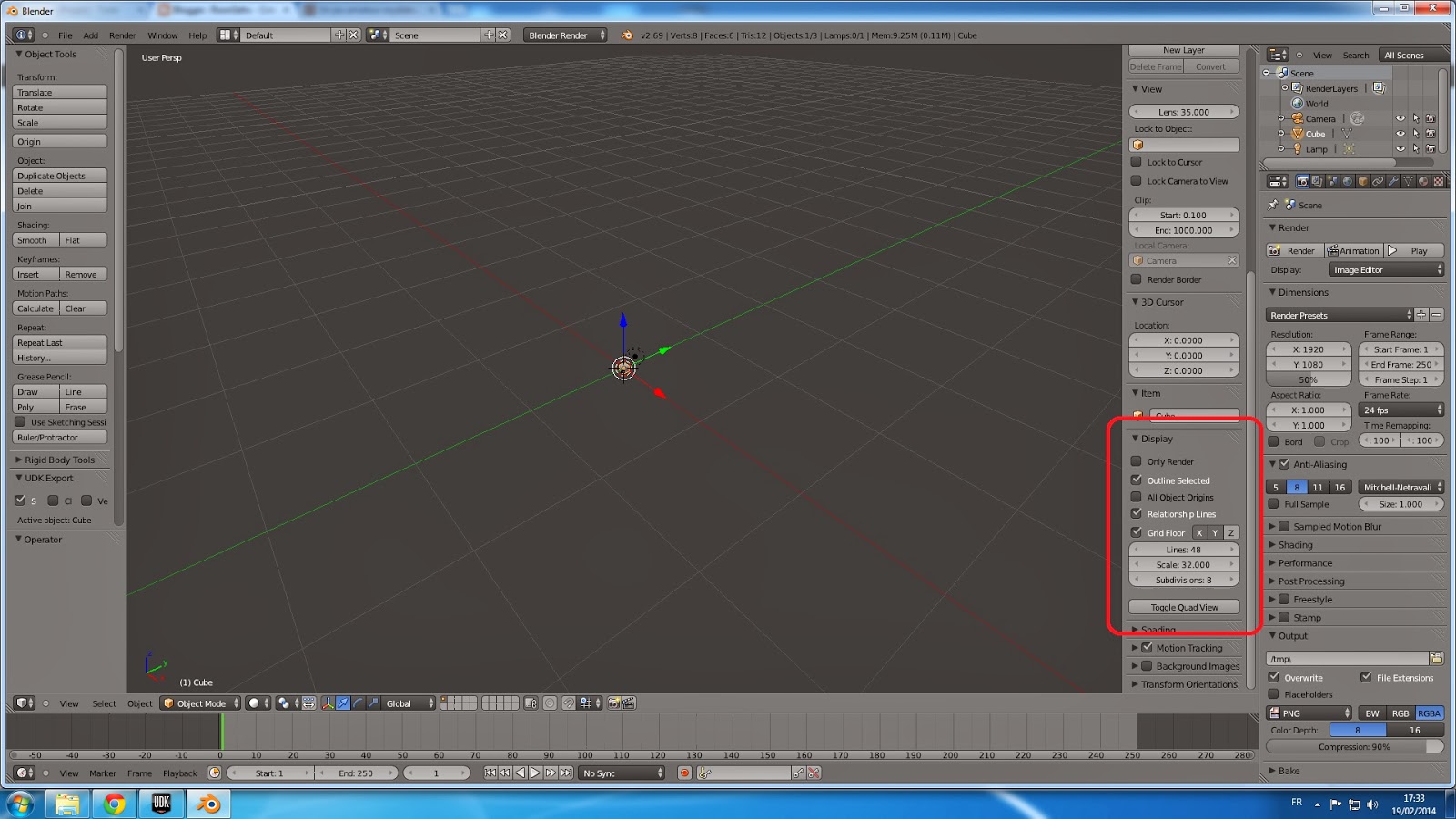 So you will get the same representative "checkerboard" of UDK ...

3D Object
You can now create all type of objects that you want. Bear in mind that when you import your BLENDER file into UDK, each meshes will be considered like a different object.

For example, you can create a door as the first meshe in Blender and add a button above as second meshe. So you will have 2 distinct objects in the UDK, you can animate each separately if you want.

Do not forget to correctly rename your objects to find them more easily on UDK. 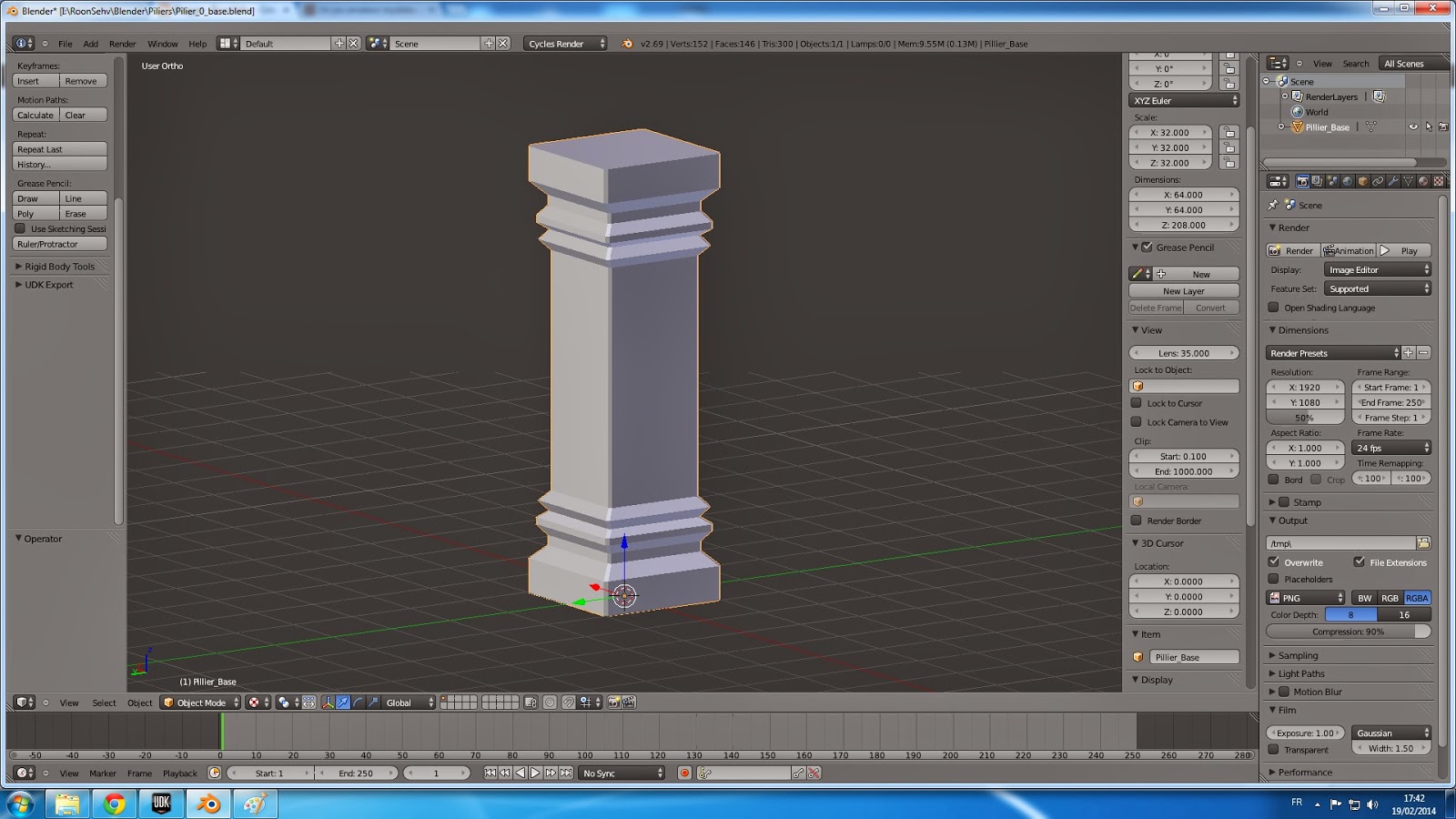 UV Devlopement
It has nothing to do with the holidays and the tan!

It’s an interesting part that I discovered recently: add a texture. To reach the goal, you have to imagine your object as an origami ... you will cut-it with lines (Seam) then unfold-it like a paper airplane. You'll have a flattened version of your object, and you can work on it! 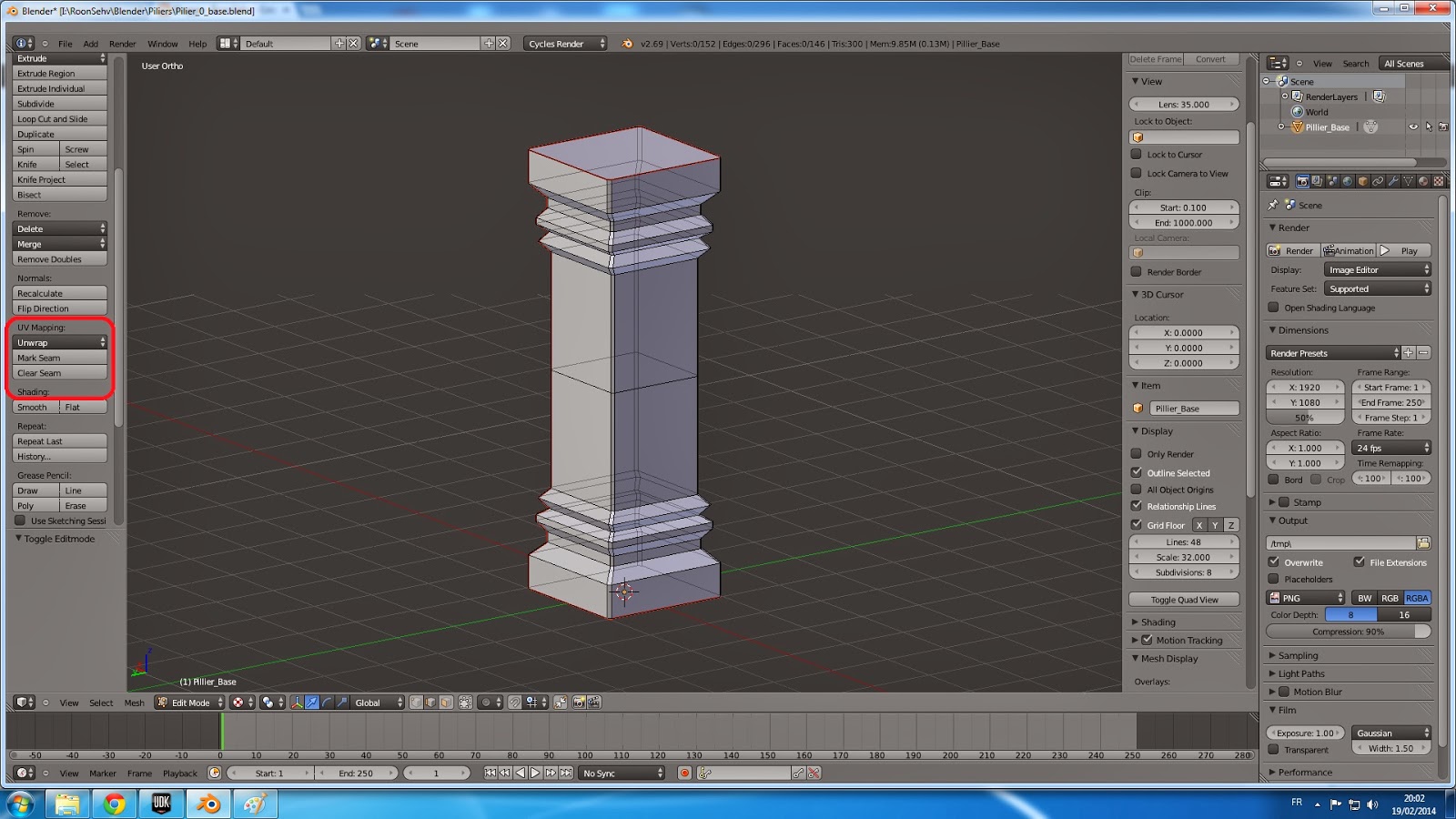 After selecting the object (edit mode, then "A") You can then click on Unwrap.

So you will get an unfolded version of your object (found in the UV / image editor part). 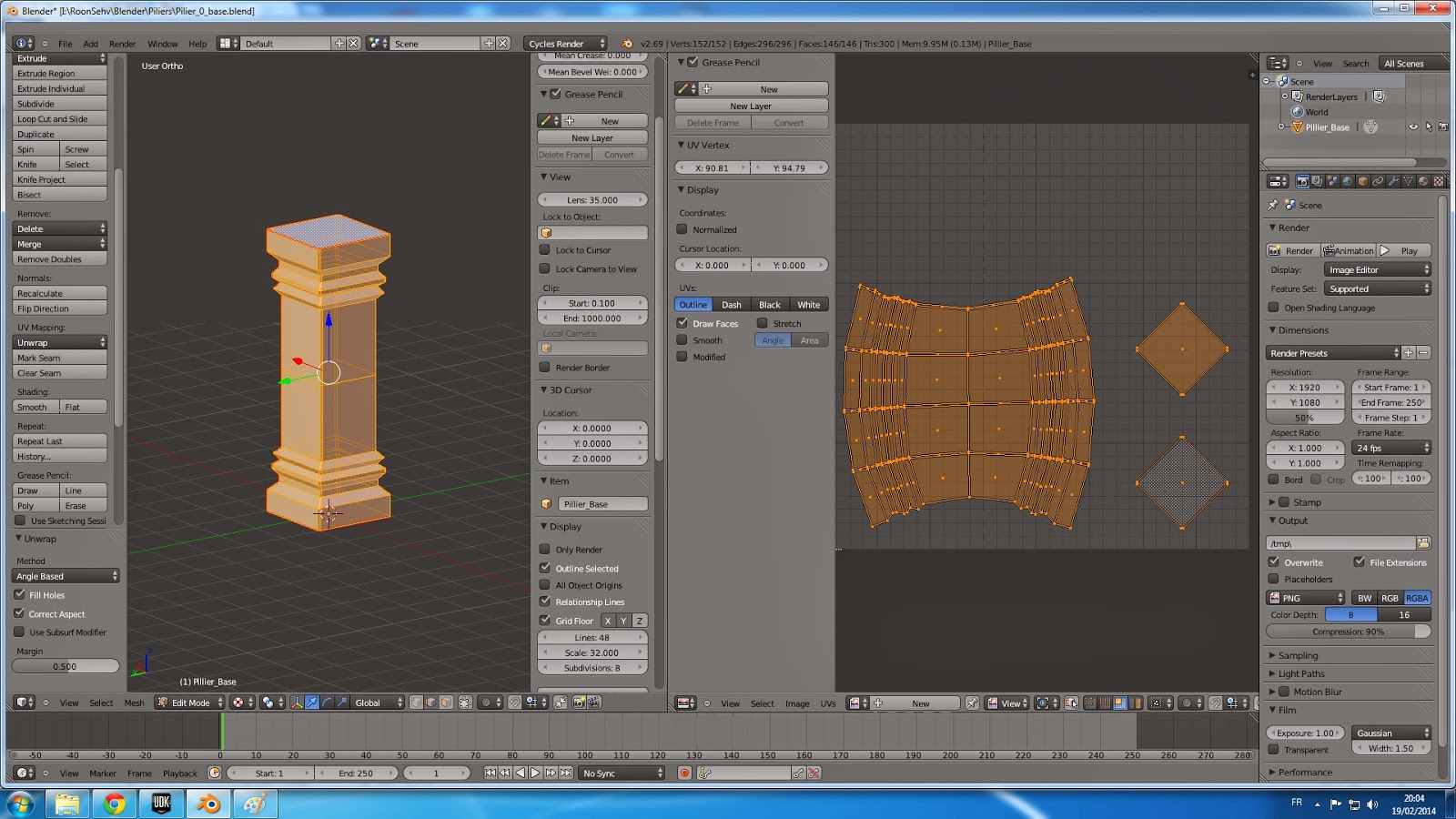 Here begins one of my favorite parts! Our mission is to "spread" our unfolded object, so that it fills the maximum space on the 1024x1024 image texture (or 512x512 if it is a small object)

There are a lot of tools in Blender that can help you to reach this goal... Feel free to test them. 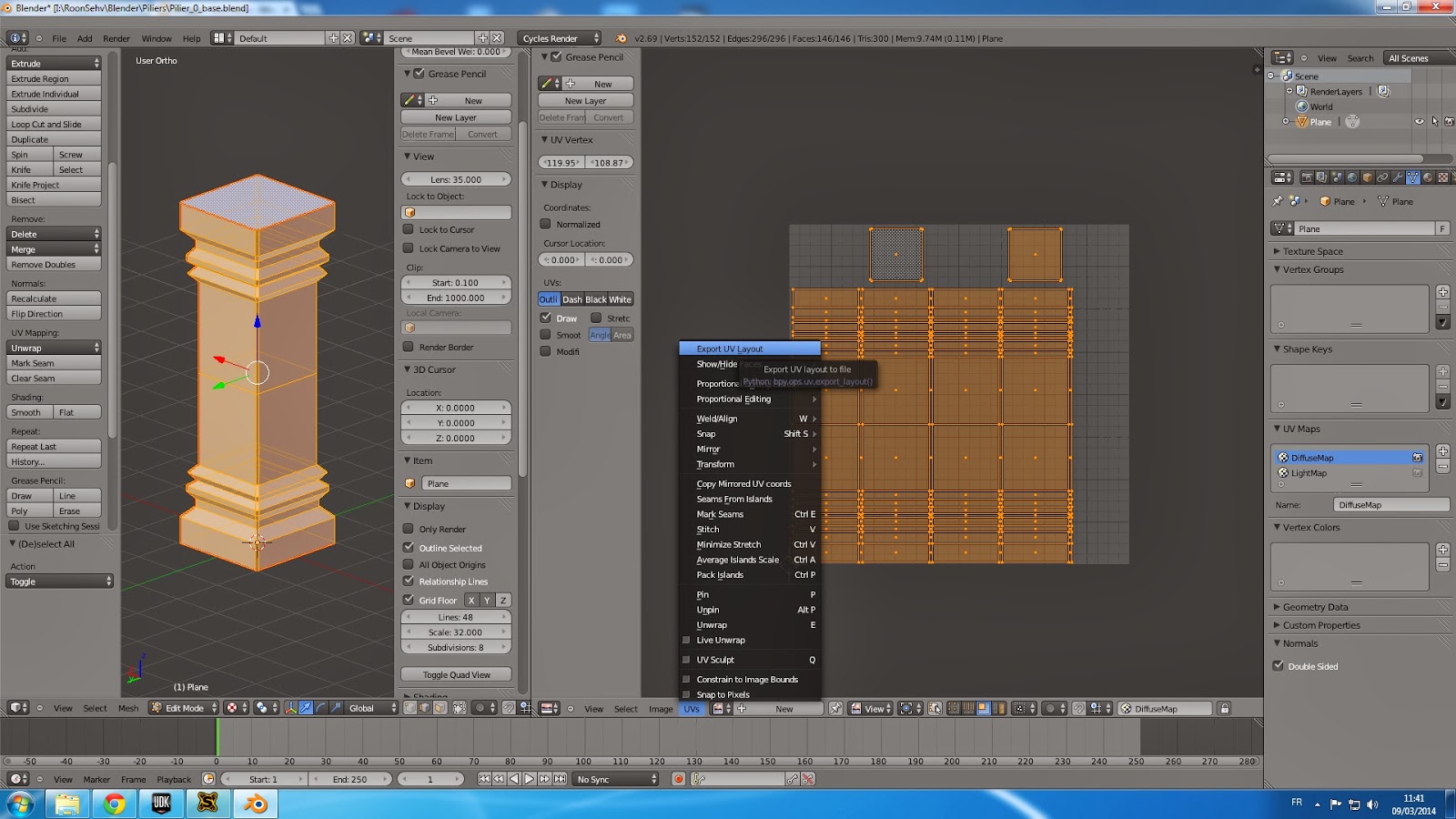 2D Texture
I will not go into the details of the realization of a 2D texture with Gimp or Photoshop.

Just, bear in mind that is better to create different "layers" in order to edit them separately and easily.

Also think about simple ways to fix your texture at any time. Once these elements are imported into UDK, maybe the result will not be as beautiful as expected... so you will need to rework them on Gimp. 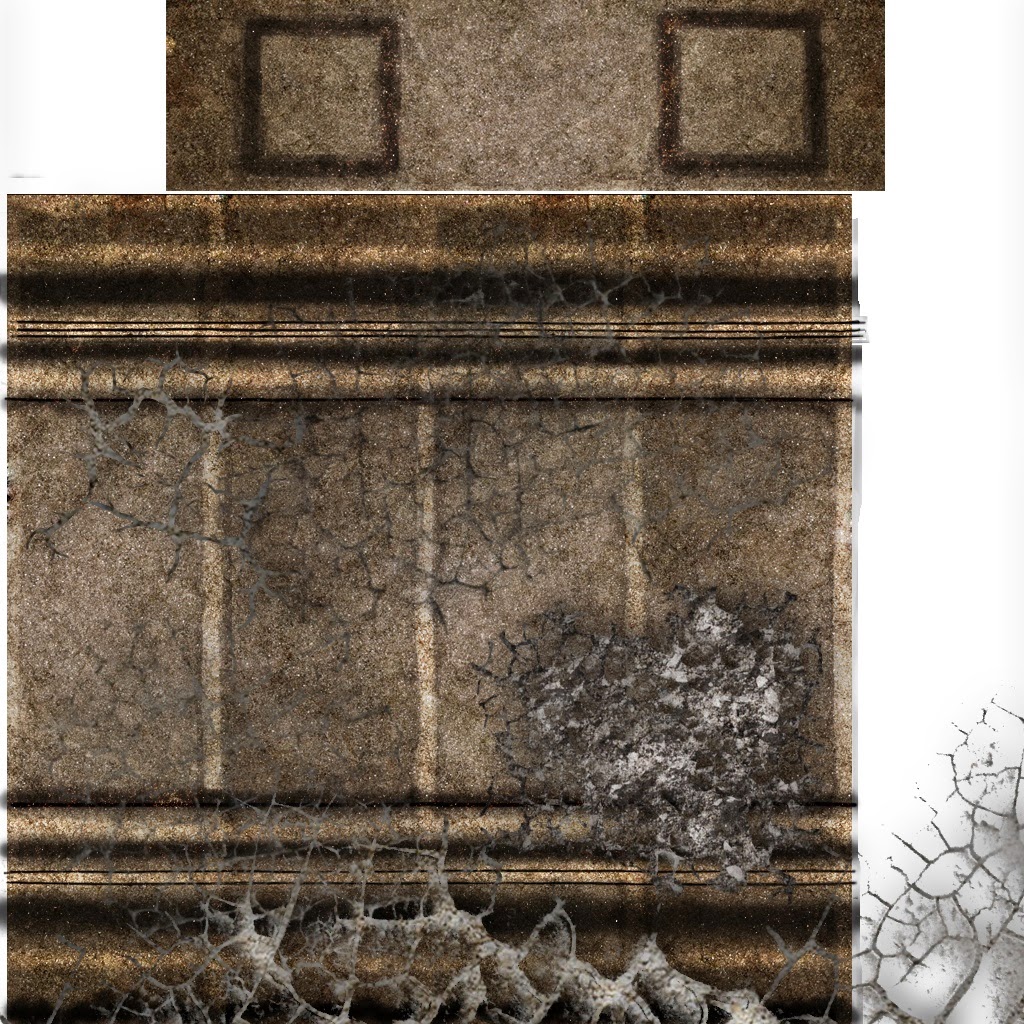 We will apply our texture on our Blender object.

These two maps are essentials to obtain a good rendering in UDK! 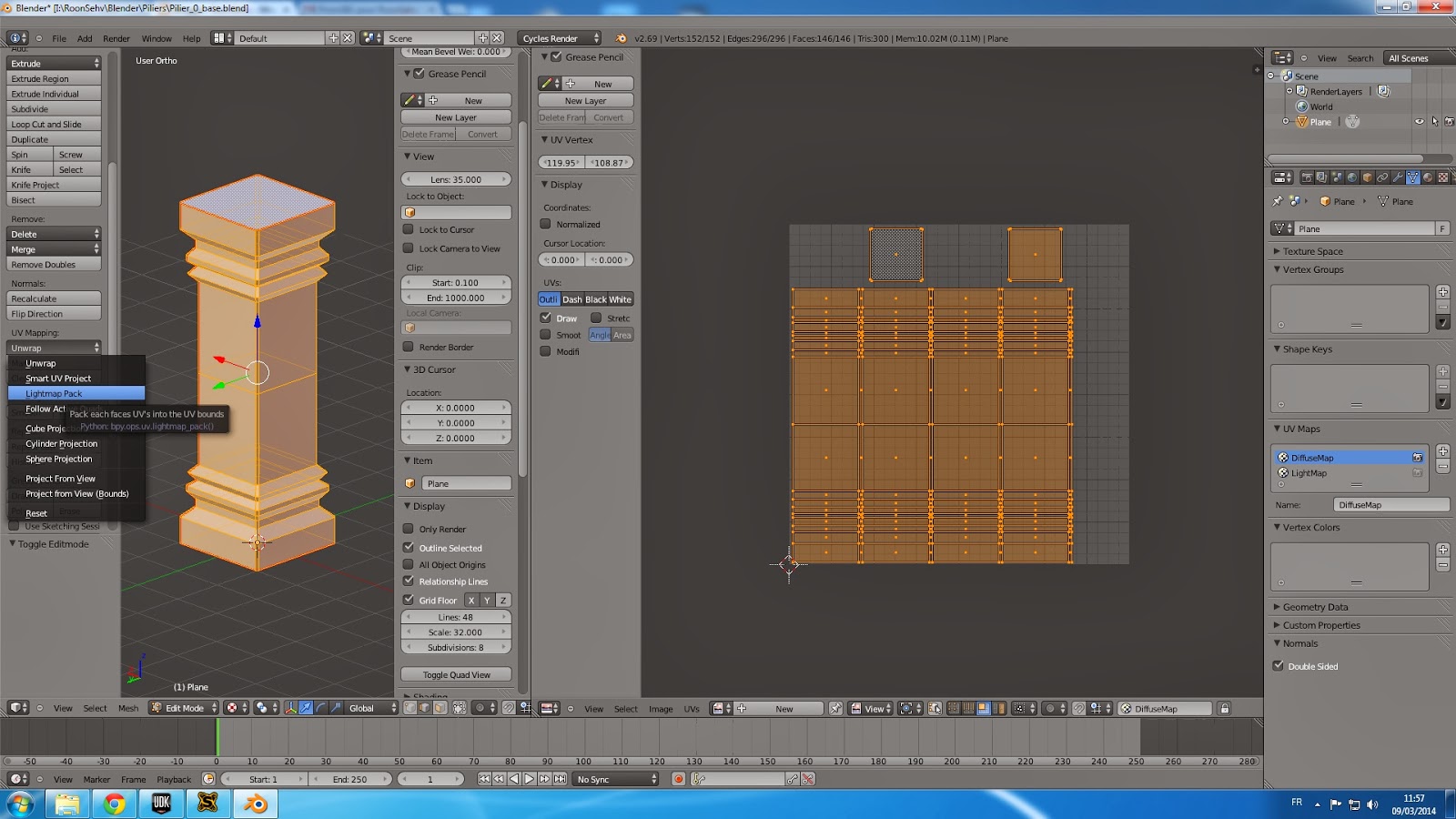 After all this, you need to create a new material in Blender: 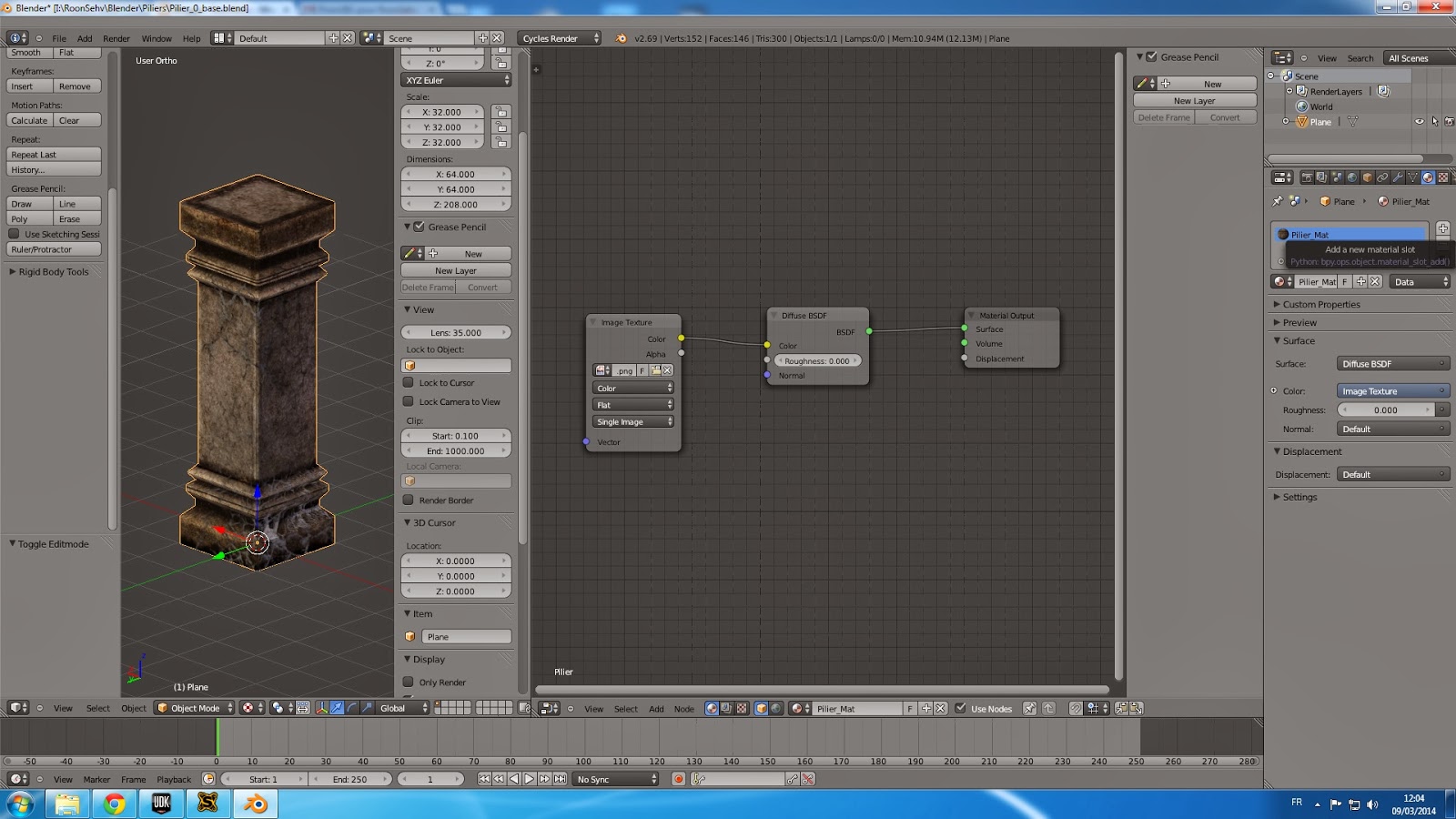 And connect the different nodes in the Node Editor by adding a texture element and loading your 2D texture.

So you'll have in the 3D render view, your pillar with his own texture...

This will allow us to check that the texture is correctly applied to the pillar!